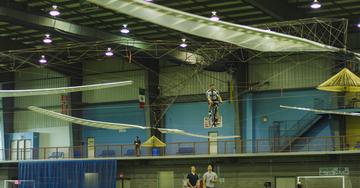 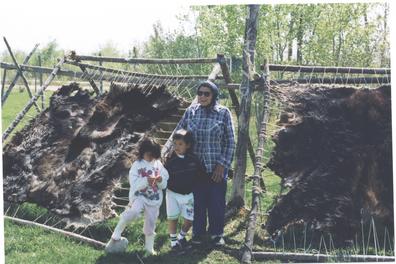 The band Seventh Fire rock Zaphod's with one of their songs from The Cheque Is In The Mail album. Shot with Sony (saticon tube) BVP-3 camera and Fujinon zoom lens. Cinematographer - Martin Dale

Using highly developed skills and an intricate knowledge of their surroundings, Aboriginal people from across Turtle Island (North America) pursue activities related to the culture which have been passed on for thousands of years. The profiles of Indigena Trek convey the spontaneous feelings of elders and youth: there are the difficult times, such as when learning a new skill or activity, but also a greater sense of identity and purpose. Shot with an indigenous crew.

People of the Woods

Visiblize Studios is producing Organic Kinetic, a series of one hour programs on human powered vehicles.

Above is a still from the episode featuring lead engineer Todd Reichert, as he pilots the human powered helicopter "Atlas" (with Aerovelo colleague Cameron Robertson on the ground, right) during the flight which won them and their University of Toronto team the Igor I. Sikorsky Human Powered Helicopter Prize. Please send email to visiblize@gmail.com for photo or footage licensing information.